When the technology became available, Miller Poultry officials eagerly embraced LED light bulbs – and even they didn’t know how cool the lights would be. Literally.

Miller Poultry, a national poultry producer based in Orland, Ind., has unique energy needs that are critical to its success. Nearly two-thirds of the facility needs to be refrigerated, and it also needs to be washed daily after business is completed. The company has partnered with Steuben County REMC, its electricity provider, on creative solutions that include Power Moves® rebates for energy efficiency upgrades.

“The LED brightness quality that used less energy was certainly welcomed, and the unforeseen benefit that we gained was that the LEDs produce less heat. About two-thirds of our facility has to be kept at 40 degrees or lower,” said Kevin Diehl, vice president of plant operations for Miller Poultry. “We could keep the rooms cool with less energy. That was a great surprise to stumble upon.”

The company, which has been family-owned since 1942 and now produces 750,000 chickens weekly, also received a Power Moves rebate in 2016 for adding variable frequency drives (VFDs). The VFDs more precisely control the speed and power to equipment throughout the facility, making the equipment more responsive to different tasks. Company officials noticed that in addition to saving energy, the VFDs minimized abrupt starts and stops to gears in the equipment, resulting in fewer repairs.

The company also created a water treatment facility and retention ponds to reuse sustainably treated water as an irrigation source for its nearby farmland that grows the all-vegetable feed given to its antibiotic-free chickens.  Miller Poultry chickens come from the company’s hatchery in nearby Goshen, Ind., and are raised by Amish families in the region. More than half of the company’s supply chain is within a 60-mile radius of its headquarters. 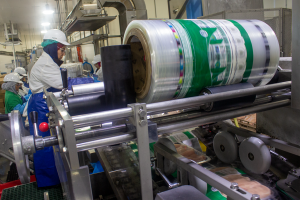 “We can look beyond Steuben County and see the significance that they have in agribusiness as a whole because of the people they employ in Indiana, Ohio, and Michigan,” said Kevin Keiser, president and CEO of Steuben County REMC. “Miller Poultry is a national success story feeding millions of American families, and we are proud to be able to help facilitate that success.”

“It’s been a lot of fun to see Miller Poultry’s continued growth,” Diehl said. “We have a great team and company that pulls together to make it all happen.”

The company’s business has grown nearly 30 percent in recent years as certain chicken cuts – think buffalo wings – have become more popular. Miller Poultry officials have collaborated on needs for future expansion; a new substation will soon be constructed to handle additional power needs because of expansion at the facility.  Steuben County REMC also worked with Miller Poultry on an economic development rate to minimize Miller Poultry’s energy needs that will be official when Miller Poultry completes its expansion.

“It’s been a good partnership, and we continue to welcome new ideas,” Diehl said. “It’s everyone’s responsibility to use power wisely. Not just for our benefit, but for the entire grid’s benefit.”