“Utility bills are usually some of your biggest variable costs. … So every bit of the inefficiencies you can root from the system will help your bottom line.”

Mascot Truck Parts needs compressed air to function. Without it, business screeches to a halt. 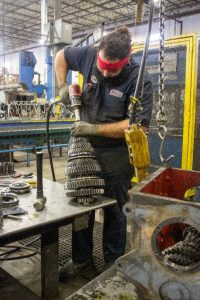 In February 2019, the company received a $13,553 Power Moves® rebate from Hendricks Power, its local electric cooperative, on a needed replacement air compressor that kept the business operating while lowering its energy use. When the company opened its Plainfield, Ind., doors in 2015, it used two 75-horsepower air compressors that had been in storage at another site in Canada. Yet it wasn’t long before they showed their age – and cost the company in high energy use.

“Utility bills are usually some of your biggest variable costs,” said Steve Brown, engineering manager for Mascot Truck Parts. “And an air compressor, even the efficient ones, still use a significant amount of power. So every bit of the inefficiencies you can root from the system will help the bottom line.” 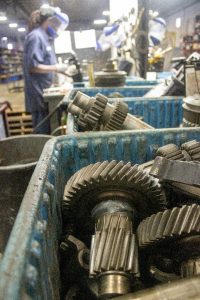 The company uses air compressors in multiple stages of the rebuilding process, from stripping down and cleaning components to inspection, rebuilding, and testing the remanufactured transmissions, differentials, and steering gears and pumps. Mascot had used one of the old air compressors as a primary, with the other acting as a backup. Yet small repairs quickly gave way to larger ones.  In the second half of 2017, Mascot spent more than $10,000 on air compressor repairs. At one point it took seven weeks for Mascot to get a replacement cooling fan from Europe. Brown knew it was time for a replacement.

When he inquired with Hendricks Power, the cooperative staff directed him on available Power Moves rebates and gave insight on how a new air compressor could help with the facility’s power factor and reduce energy consumption to save money. 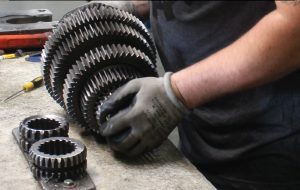 “Businesses such as Mascot are crucial to our success not only as a cooperative, but for our communities,” said Greg Ternet, president and CEO of Hendricks Power. “We support the businesses that we serve with energy management resources so that they can be in as strong a position as possible to accomplish their goals.”

Mascot’s new air compressor includes a variable speed drive to better control the airflow for needed processes. Brown noticed significant energy savings on Mascot’s first energy bill with the replacement compressor installed. He anticipates that the energy savings will pay back the difference on the cost of the new equipment within two years.

“The rebate moved the needle quite a bit, but it was still very good payback,” Brown said, “And that’s even before you talk about how much of a headache the maintenance was on the old compressors.”

The new compressor will support Mascot’s steady growth. The company’s transmission business has more than tripled, and employees are reworking the facility layout for new equipment and materials as volume expands.

“Our business has grown, and the challenge we have right now is we’ve got to build more,” Brown said. “It’s a big change for this facility, and it’s a very exciting time for us.”