A diesel truck parts manufacturer received a training grant for its staff to learn new machinery. The lessons led to new ways to create its products – and charted paths into new markets with newly invented offerings.

An employee of Fleece Performance Engineering at its Pittsboro, Ind., facility.

Fleece Performance Engineering received the $15,000 Automation Workforce Grant from Hendricks Power Cooperative, its local electric cooperative, and Wabash Valley Power Alliance, the co-op’s wholesale power provider. The workforce grant is for businesses served by WVPA member co-ops to purchase equipment and training to fulfill their needs. Fleece Performance used the grant to buy machinery to more efficiently create wire harnesses that secure wires and cables. Fleece also purchased a training package from the equipment manufacturer, which provided the training session when the equipment was delivered earlier this spring.

“Within the first week the machine was fully operational, everybody who works with it knew how to use it and was very comfortable with it,” said Jeff Merriman, chief operating officer for Fleece Performance. “Without the training, it would’ve taken us a lot more time, and we probably would’ve had a lot more trial and error in getting the machine to work the way we needed.” 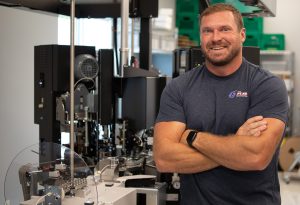 With the new equipment, Fleece Performance brought production of some existing wire harness products previously created off-site into its facility. The company also could produce other wire harnesses more easily, freeing up employees to work on other tasks. The Automation Workforce Grant helped pay for some employees to receive training on other fabrication machines, Merriman said.

“The majority of the wiring harness products that we were making were support products for the fuel pumps we sell,” he added. “We were able to control of a lot of the timing, cost and quality when we brought all of that harness production in-house. We improved the product that we already had on the market first, then we moved into releasing new products, which is happening right now.” 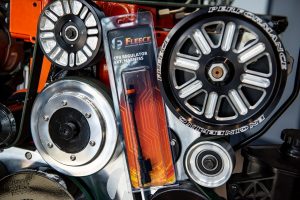 Fleece Performance engineers became interested in the new equipment in part because of the supply chain issues created during the coronavirus pandemic. Shortages and shipping delays for materials offered the business a unique opportunity – and it took advantage, utilizing the new equipment to control more of the manufacturing process in-house.

“Fleece Performance’s strong growth over the last few years was a unique fit for the Automation Workforce Grant,” said Brian Anderson, director of economic development for WVPA. “We want for the grant to be flexible enough to support a wide breadth of business needs. We’re proud to support the companies served by our members to help them be successful.”

Fleece Performance has developed a strong relationship with Hendricks Power. When the company built its headquarters in 2019, Fleece Performance received $25,000 in Power Moves® rebates for energy efficiency upgrades that lowered its long-term energy use. 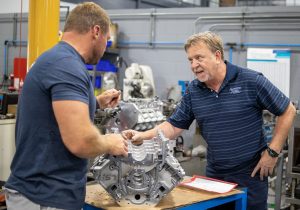 “It was extremely beneficial. Hendricks Power helped us to identify some ways to save power, save costs and available rebates for choosing more energy efficient lights,” Merriman said. “When moving into a new facility, you have to make sure that all the utilities are going to be able to support the building as well, and Hendricks Power was a big help in getting us there.”

Fleece Performance has grown between 20 and 30 percent annually, and was on pace to do that again in 2022. The business already is looking at options that may be available when expansion may be needed in a few years.

“It’s hard not to be impressed with the innovation and ingenuity that Fleece Performance has demonstrated, and the success in what they’ve accomplished,” said Greg Ternet, president and CEO of Hendricks Power. “We look forward to continuing to serve Fleece Performance and ensuring that they have the support needed to thrive.”