The phone call was about an electric cooperative program offered to the school district where he worked. It began a multi-year partnership that led to thousands of dollars in rebates – and even more in long-term energy savings. 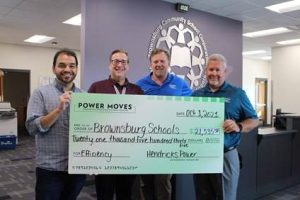 The Brownsburg Community School Corp. in Indiana received more than $90,000 for five schools enrolled in PowerShift, an electricity demand-response program. The schools are served by Hendricks Power Cooperative, which collaborates with Wabash Valley Power Alliance, its wholesale power provider, to offer the program. The Brownsburg district receives a rebate from Hendricks Power in exchange for agreeing to shift power on days of high electricity demand, such as summer afternoons when air conditioners are on full blast, to later in the day when demand is not as high. Brownsburg has enrolled four elementary schools and a middle school in the PowerShift program. The participating schools have chilling towers and industrial chillers turned off during the events, which have not taken place during the school year while students are in the buildings.

“That was the biggest selling point to me: it does not impact kids during the school day,” said Faulkner, the facility services coordinator for the Brownsburg district. “We were asked only a few times to turn the systems off, and we have been able to participate. It has not impacted anyone in the buildings.” 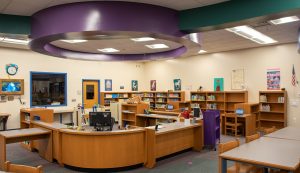 The school district can decline to participate if schools are in session or students are impacted. Brownsburg received at least $30,000 each of the last three years for enrolling in the program.

“We feel like it’s a good return on our investment, and it’s beneficial not only for our schools but also our community,” Faulkner said. “We have been able to utilize those dollars to put money back into projects leading to more energy savings.”

Over the last few years, the Brownsburg district upgraded lighting in multiple schools to more energy efficient LEDs. LEDs emit brighter light, use less electricity and have a longer lifespan than other kinds of lighting, which can lead to energy savings and lower maintenance costs. The district paid for the lighting upgrades in part with the PowerShift rebates.

The school had tens of thousands of dollars in annual maintenance costs for the older lighting systems and fixtures. Contractors in bucket trucks were regularly needed to replace parking lot security lights that had burned out, said Christopher Hogan, assistant facility coordinator for the Brownsburg school district. 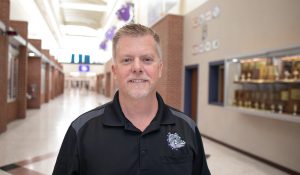 “One of the big things for us was the maintenance costs we were seeing with older high-intensity discharge fixtures,” Hogan said. “Now, our maintenance staff is relieved of many of the repair hours and other costs associated where the LEDs replaced the outdated parking lot lights or classroom lights. We have savings of up to 80% and great quality light, with lower degradation and longer lasting fixtures over time.”

The Brownsburg district has taken advantage of the Power Moves® rebates offered by Hendricks Power to support the lighting upgrades. Hendricks Power offers rebates for energy efficiency upgrades that use less energy over time, which also save money on long-term energy costs. In 2022, Brownsburg received $124,000 for multiple projects, including at two elementary schools and a middle school, that collectively are projected to save 10.7 million kilowatt-hours of electricity over the next five years. 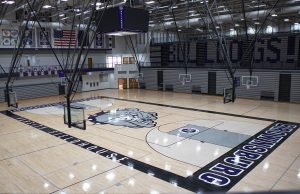 The gymnasium at Brownsburg High School in Brownsburg, Ind. The school district received more than $90,000 to participate in PowerShift, a program offered by the school district’s local electric cooperative. The district then used the rebates to fund lighting upgrades in district schools, including the high school gymnasium.

“We want to be a valuable partner for all of those we serve, particularly schools that have such a critically vital role in our community,” said Greg Ternet, president and CEO of Hendricks Power. “We are thrilled at how the rebates have helped Brownsburg pursue additional projects to continue benefiting the school district.”

The Brownsburg school district has rapidly grown; about 300 more students enrolled in district schools in fall 2022 compared to the previous year. The district is planning final lighting upgrades to existing schools, while incorporating LEDs into new buildings, including a new elementary school opening in 2023.

“We are a district that strives to have safe, non-distracting, well-lit and attractive facilities for our students, teachers, parents and community,” Hogan said. “These upgrades make good sense, and also reflect our belief in being good stewards of the facilities we have been blessed to care for.”