A picturesque community park attracting local residents to its playgrounds, trails and a baseball field complex also routinely hosted other visitors: repairmen in a bucket truck to fix or replace burned out security lights.

Fortunately, the local township received support from its local power provider for a more permanent solution– and even got paid money to do so.

One of the softball fields in Hummel Park. Guilford Township, which manages the park, upgraded a nearby security light to an LED after the previous light needed repairs a few years after it was installed.

Guildford Township, located in Hendricks County, Ind., received $2,755 in Power Moves® rebates from Hendricks Power Cooperative, its electricity provider, for upgrading exterior security lights in the 205-acre Hummel Park. The exterior lights are in the parking lot, near the performing arts center, several trails and outside of the baseball and softball complex press box. The upgraded LEDs save 26,182 kilowatt-hours in energy use compared to the previous lights.

“They were pretty nice lights, but it was nothing we could service with our team,” said Guilford Township Trustee Chuck Ellis. “We had to hire people when the lights would go out.”

The nightly use of the dusk-to-dawn security lights led to lights that would regularly need to be replaced, Ellis said. Officials would wait until several lights would go out to justify the cost of hiring a contractor to bring in a bucket truck so they could reach to fix or replace the lights. 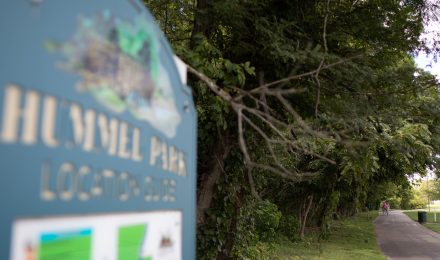 Cyclists ride on a trail in Hummel Park in Hendricks County, Ind. Guilford Township worked with Hendricks Power Cooperative for Power Moves® rebates to upgrade security lights in the park to LEDs, which are more energy efficient and have a longer lifecycle than the previous lights.

LEDs can lead to significant savings because they have a longer lifecycle than most other lights, leading to fewer maintenance and replacement issues, said Steve Hite, energy advisor at Hendricks Power. LEDs also use less energy while emitting brighter light, which leads to significantly less electricity required to get as much or more brightness from the light.

“LEDs in many cases can be a clear win that lowers energy costs for businesses, regardless of their industry,” Hite said. “The Power Moves rebates we offer can help speed up the time it takes for an upgrade project to pay for itself in energy savings, making a lot of projects even more appealing.”

Hendricks Power employees visited Hummel Park and reviewed the project. Guilford Township employees then worked with the co-op to ensure the project qualified before submitting the application. The upgrades were completed over two years ago, and not a single LED has since needed to be replaced. 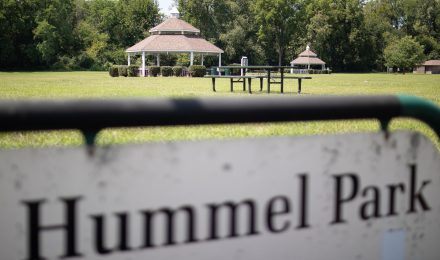 Hummel Park features a variety of amenities, including gazebos, basketball courts and even a performing arts center, for local residents to enjoy.

“We’re impressed. They were great to work with, and the process was simple,” Ellis said. “Dealing with our REMC, they are local.”

The Hummel Park project highlights how different kinds of businesses and organizations can benefit from energy efficiency upgrades that can improve energy use and lower overall costs, said Greg Ternet, CEO of Hendricks Power.

“Hummel Park is a gem that provides unique programs and opportunities that significantly improve the quality of life in our community,” Ternet said. “We are invested in all of the members that we serve, and we are proud to partner with them to help solve their energy needs and ensure their success.”