Seeing (Because of) the Light


Visitors to a renovated Missouri church were surprised at unnoticed details in murals over a century old. A new LED system helped bring them to light. 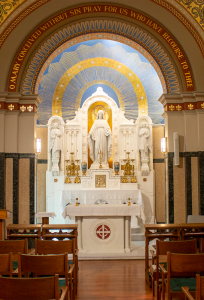 The Perryville, Mo.-based Association of the Miraculous Medal in 2017 renovated St. Mary’s of the Barrens Catholic Church, which includes the National Shrine of Our Lady of the Miraculous Medal. The Association worked with Citizens Electric Corp., its local electric cooperative, on new LEDs to replace incandescent lighting. In all, the Association received $18,364 in Power Moves® rebates for lighting upgrades on the organization’s campus from 2015-2017. The lighting upgrades have saved more than 135,953 kilowatt-hours each year.

“Anytime you are dealing with a nonprofit, especially a religious nonprofit, things are always tight. We want to make sure all of our valuable resources go toward our mission,” said Don Fulford, president and CEO of the Association of the Miraculous Medal. “What the upgrades meant to us was that we could make the place brighter for all of our wonderful visitors and guests. We could illuminate more of the beautiful artwork that was here, and we can do it at a much cheaper cost.”

The 2017 renovation was the first significant work done to the church in 40 years, Fulford said. The outdated lighting had created challenges for visitors attending Mass in the artistically adorned structure. 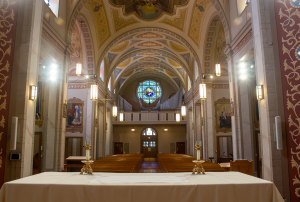 Citizens Electric Corp. has worked with the Association on various projects as the group has expanded its site. The Association also had done LED upgrades in additional buildings on campus over the last several years.

“The Association of the Miraculous Medal has been a significant community organization that regularly brings visitors to the region,” said Van Robinson, president and CEO of Citizens Electric Corp. “We are proud to collaborate with the Association on the work that they have done as they have grown their campus to best serve their supporters across the nation.” 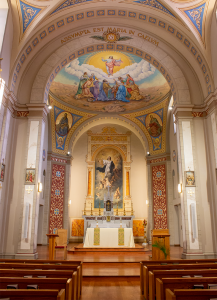 The Association has received numerous compliments on the renovations. One response that particularly stuck out to Fulford was a second grader who on a recent visit to the church glanced at the decorated ceilings and windows. The child commented that it was the most beautiful church that he had seen.

“As he looked up, I know that the new lighting system had a lot to do with it because he can now see the beautiful murals, he can see the artwork,” Fulford added, “and … it was because of our partnership with our co-op.”

The lighting upgrades will help reduce long-term energy costs, as they use only one-tenth of the electricity as the previous lighting. The lighting upgrades also have improved the experience for local visitors, and the organization’s partnership with Citizens Electric Corp. reflects their success, Fulford said.

“A community to me is a partnership of businesses, nonprofits, and of course the wonderful families,” he added. “Together as the threads of a community tightly bonded with high character, we can move forward and do what we need to do … to make this area and this region a great place.”

Download the full Association of the Miraculous Medal Case Study.