Mike O’Grady is no stranger to the Bloomington-Normal, Illinois community. For 35 years, he was seen around the Illinois State University campus, where he worked as an administrator managing grounds and transportation. During that time, Mike often spent his free time raising funds for the Bloomington-Normal Economic Development Council (BNEDC) in a volunteer capacity. Eventually, he joined the BNEDC full-time ultimately serving as interim-CEO before retiring from the organization in 2019. Today Mike serves as a part-time economic development representative serving the Illinois-based member cooperatives of Wabash Valley Power Alliance — his philosophy deeply rooted in community service.

“Driving economic development helps everyone in our region thrive, not just those directly involved with the project,” O’Grady said. 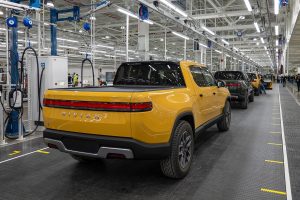 Rivian’s production facility in Normal, Ill. Wabash Valley Power has partnered with Corn Belt Energy to support economic development and community growth needs in Bloomington-Normal, Ill. Rivian, a major employer in the area, is near the territory served by Corn Belt Energy and has a much larger benefit to the Central Illinois region.

Through it all, O’Grady has built countless connections and relationships with community members and government officials, supporting tremendous growth across the Bloomington-Normal region. And during his tenure with WVPA, nothing has demonstrated that more than the Rivian Automotive project.

After the Mitsubishi Automotive plant shuttered in 2015, more than 1,200 people found themselves unemployed as Mitsubishi set plans in motion to demolish the 2.6-million-square-foot manufacturing facility. In 2017, just before that demolition was set to take place, BNEDC and the town of Normal were presented with a unique opportunity — one that would bring thousands of jobs back to the area permanently but would also come with its fair share of challenges. 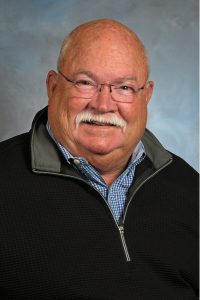 The plant was originally constructed in 1986, so while Rivian was attracted to the idea of bringing operations to an existing manufacturing facility, their operation required different infrastructure and upgraded capabilities.

“We knew they were going to need increased power and a greater water supply,” O’Grady said. “So our economic development council and Corn Belt Energy worked together to find the providers to make that happen.”

As the plant grew from about 1,000 employees in 2021 to nearly 6,000 BNEDC helped get a new road constructed, providing improved access the building.

For O’Grady, going the extra mile to help these companies succeed in the region by ensuring they have the power, infrastructure, and workforce they need is crucial to the company and community’s survival.

“My philosophy focuses on the human impact of economic development, and what projects like these mean to communities like Bloomington-Normal,” he said. “You just feel the positive ripple effect in the community.”

For O’Grady, it’s just one of the many selling points that helps attract companies to the area.

“We are centrally-located, have a low cost-of-living, highly-rated schools, and dedicated community support — and our teams go the extra mile.”

While he says Midwest hospitality is always an attractive feature, the region’s shovel-ready sites in developable areas with utility capabilities and nearby major airports make WVPA territory an ideal place to do business.

Part of that process for the BNEDC has been bridging the gap between the region’s school systems and the companies that locate in WVPA territory. Programs like the Automation Workforce grant help ensure the region’s college students have access to the training that makes them job-ready.

“That means once these companies move to the region, they gain access to a highly-skilled, trained, and capable workforce that can meet their demands, day one,” O’Grady said.

While the workforce continues to grow, it also remains stretched — as does available housing in the area. With massive operations like Rivian, Corn Belt Energy and BNEDC are working to address the need for more housing developments. They recently conducted a housing study assessment to better understand the current demand and create a plan to increase housing development.

“Right now there are quite a few commuters to the region,” O’Grady said. “Proximity to major universities has helped ensure continued access to a qualified workforce, but now it’s time to work to bring the infrastructure in line with demand.”

While Corn Belt and WVPA are not the primary energy providers to Rivian, the energy companies are linked to their future growth. Rivian continues ramping up operations and is on track to meet its target goal of manufacturing 25,000 electric vehicles in 2022. They’re also working with BNEDC to further expand their local footprint—purchasing additional land near the current plant in Normal with plans to establish a battery manufacturing facility.

And whatever they or any other company needs to bring their project to life, BNEDC, Corn Belt Energy, and WVPA will be ready.

“The bottom line is that’s why we’re here,” O’Grady said. “We’ll get there. We’ll get you there.”