The increasing speed of technology has generated new ways that electric cooperatives can best serve their local communities. One Missouri co-op took that concept to the street – literally. 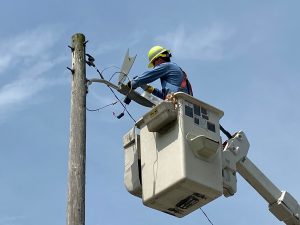 A Citizens Electric Corp. lineman installs a new LED security light. Linemen from the electric cooperative upgraded street lights in the communities served by the co-op to more energy efficiency LEDs, which are brighter and use significantly less energy than previous models of security lights.

Since 2016, Citizens Electric Corp. has upgraded street and security lights in its service territory to more energy efficient LEDs. LEDs have a longer lifecycle and are brighter while using less energy than other kinds of lights, such as high-pressure sodium outdoor lights. Citizens Electric has received more than $375,000 in Power Moves® rebates from Wabash Valley Power Alliance, its wholesale power provider, for upgrading nearly 6,200 light fixtures. The upgrades save more than 1.9 million kilowatt-hours of electricity annually.

“With the Power Moves program and the rebates available, we looked into it and saw how it could benefit the communities we serve,” said Steve Elsea, manager of member services for Citizens Electric. “We were seeing our commercial and industrial members do a lot of lighting upgrades, and of course there were a lot of outdoor lights that could benefit by upgrading to newer LEDs. The rebates helped make these upgrades affordable, and of course they lead to significant long-term savings.” 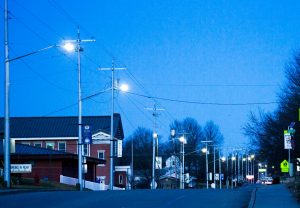 Citizens Electric planned the lighting upgrades each year based on available funding and community need. In Ste. Genevieve and Perryville, Mo., Citizens Electric operates the lights and charges the communities based on the energy use and maintenance costs. Prior to converting to LEDs in 2016, the City of Perryville was spending more than $60,000 annually; upgrading to LEDs saved over $20,000 a year, said Brent Buerck, city administrator of Perryville. The new LEDs also have a 10-year warranty, which provides additional savings on maintenance, he added.

“We were in frequent conversations with Citizens Electric, and the lighting upgrades came up as one of the things we were interested in doing,” Buerck said. “It’s been great. Our utility bills are lower, and the reliability is higher. It’s worked out really well for us.”

Several community members remarked that they liked the brighter lighting; some of the streetlights replaced had different kinds of bulbs that faded as they aged, which does not occur with LEDs.

The largest portions of Citizens Electric’s service territory now have the new security lighting installed. The co-op continued the project in 2021, and in 2022 plans to replace lights in a few remaining subdivisions and individual properties. When the project is completed, Citizens Electric will have replaced nearly 8,000 security lights in the communities it serves.

“Citizens Electric has always been a great partner,” Buerck said. “The lighting upgrade project was a great process.”

Project
• Retrofitting more than 7,900 street and security lights in communities and neighborhoods in southeastern Missouri