“The way we looked at it, we are trying to do what we can to reduce expenses for the school corporation. Reducing energy use was one of the things we could do.”

South Central School Corp. officials were studying how solar energy could lower their electricity costs when a salesperson told them they didn’t have to look up the answer. They just had to look up.

The South Central School Corp. received $10,035 in Power Moves® rebates from Kankakee Valley REMC, its local electricity provider, for energy efficiency upgrades. The school corporation replaced fluorescent lights and fixtures with more energy efficient LED lighting fixtures and more than 3,000 LED bulbs in the elementary and junior-senior high schools. Shortly after the discussion with the solar panel salesperson, school officials shifted to the lighting upgrades as a more cost effective alternative; the project saves 225,142 kilowatt-hours per year. The upgrades included hallways, classrooms, and a gymnasium that has lights on daily from 6 a.m. to 11 p.m. 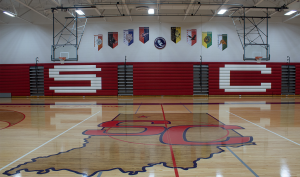 “The way we looked at it, we are trying to do what we can to reduce expenses for the school corporation,” said Dr. Theodore Stevens, superintendent of South Central School Corp. “Reducing energy use was one of the things that we could do.”

As school officials considered the potential project, they reached out to Kankakee Valley REMC. Co-op employees gave suggestions on the project. Once the project got underway, the co-op staff also supported South Central through the Power Moves application process to ensure the project had the energy savings to qualify for the rebate.

“Anytime we want to do something, we just call Kankakee Valley REMC, and they start to give us specifics,” said Jeff Rucker, director of maintenance for South Central School Corp. “It is that easy.”

The LEDS use less energy and have a longer lifespan than the previous light bulbs. A previous project in the school incorporated LEDs, which also have been easier to maintain, Rucker said. 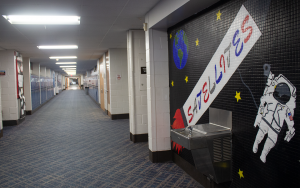 “South Central schools do a great job serving our community, and preparing our kids to become future leaders,” said Scott Sears, CEO of Kankakee Valley REMC. “They are critical to our local community. We are proud to serve them and help them be successful.”

The LED upgrades already had a noticeable difference in the schools’ energy use. Stevens noted that the schools have lowered their energy usage by at least 10 percent last fall compared to the previous year.

The school district continues to research projects that make financial sense for the school corporation. Yet the lighting upgrades benefit the school system no matter what is pursued in the future, Stevens said.

“They have been a great partner to South Central schools,” Stevens said of Kankakee Valley REMC. “They have been very good to us, and we trust their advice and counsel.”