As a beekeeper for almost 40 years, Dale McMahan has seen a lot. Now the president of the Beekeepers of Indiana, he has witnessed parasites and pesticides drive the gradual decline in the populations of pollinators, or insects such as bees and butterflies that pollinate plants. While many frustrated former beekeepers got fed up and quit, McMahan created Apis Engineering, a company that creates artificial insemination equipment for honeybee queens.

So when a chemical spray applicator called him earlier this spring to inform him that nearby farmers were preparing to spray their fields, McMahan instead convinced the group to leave out the pesticide to help save local pollinators, including his bees. 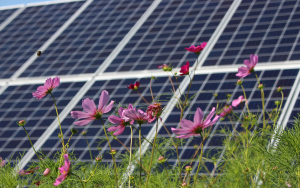 “With industrial farming, the bees’ natural forage habitat has been all but eliminated,” said McMahan, who started his first bee colony in 1981. “Pollinators do get pollen from corn and nectar from soybeans but this is virtually a single source of food for them. All insects and animals benefit from a varied diet.”

Next spring, a new planting near McMahan will provide a new food source to help bolster insect populations in an example of larger efforts to halt the decimation of pollinator populations nationwide.

Jasper County REMC and Wabash Valley Power Alliance (WVPA) this fall constructed a solar array in Wheatfield, Ind., as part of Co-op Solar, a community solar program created by WVPA and its 23 member co-ops. The program features arrays in Indiana, Illinois, and Missouri. Solential Energy, the company building and installing the arrays, planned an addition to the Wheatfield site: pollinating wildflowers and plants. The wildflowers require less mowing than regular grass and support local pollinators as another food source.

“I think planting pollinating flowers and plants at the array is a fantastic idea,” McMahan said. “Not only are the plants food for the insects, it’s also good for the environment because the pollinating plants don’t need to be mowed and fertilized as often as a lawn.”

Solential Energy first started planting pollinating wildflowers in solar arrays this year, including at the Co-op Solar array constructed in LaOtto, Ind., which is served by Noble REMC. The flowers grow to be about two feet tall, stopping a little short of the solar array base.

“It has a good environmental impact, it keeps the site looking nice, and it lowers maintenance cost,” said Andrew Horstman, manager of load response for WVPA who helped plan the construction of the Co-op Solar arrays. “It’s a win all around to do a wildflower mix for pollinators.”

Solential Energy President Jim Shaw first learned of solar array installers planting wildflowers in 2016. Customers have several options for array sites, including gravel and adding grazing animals such as sheep to keep grass and weeds from growing too tall. Yet the wildflowers’ cost savings and benefits have made them an appealing option, Shaw said.

“More customers are asking about this next step of planting the pollinators,” he added, “which is to me another positive input about what is going on.”

“There has been a significant decline in pollinators and their habitats around the world,” said Brianne Lowe, State Biologist for the U.S. Department of Agriculture’s Natural Resources Conservation Service. This decline has significant repercussions for people because “one out of every three bites of food is thanks to a pollinator,” Lowe said.

Incidents such as the population decline of the rusty patched bumble bee, which has a range that historically included most of Indiana, Illinois, and part of Missouri, helped make more people aware of how significant the pollinator decline has become, Lowe said. In 2017, the U.S. Fish and Wildlife Service listed the rusty patched bumble bee as endangered under the Endangered Species Act.

As more people have become aware of pollinators’ struggles, many have become beekeepers – McMahan notes that hobby beekeeping is at “record levels.” People are learning how to deal with the parasites and pathogens that bees encounter, he added.

“I would encourage everyone with the means to do so to plant pollinator friendly plants,” he added. “Some species depend on it.”

Hoosiers interested in learning more about beekeeping as a hobby can find more information at The Beekeepers of Indiana website at www.indianabeekeeper.com. Additional organizations such as The Xerces Society are dedicated to protect invertebrates such as insects and their habitats; more information can be found at xerces.org.