“It was a pretty expensive project for us, and we were on the fence as to whether or not we wanted to invest that much in a capital expenditure. We found out we were eligible for a rebate, and after that, it put us off the fence and we decided to go ahead.”

When East Perry Lumber started more than 70 years ago, the process of carving timber into lumber boards was rooted in constancy. Since then, technology has evolved. A lot.

East Perry Lumber CEO Stan Petzoldt grew up around the business his father started in 1945. Through the decades, he has seen firsthand how the industry has transformed. He successfully navigated those changes once he took the reins in the 1980s and East Perry Lumber expanded to nearly double in size and employ 80 people. 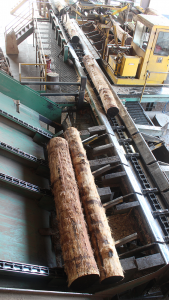 That also meant contemplating new technology as it became available. In 2017, East Perry Lumber officials learned of new machinery available that could upgrade the log carriage system. The system holds and cuts hardwood timber into measured logs that are sold to customers that use them for everything from railroad ties to furniture.

“We were wanting to replace this system,” Petzoldt said. “We were having some reliability issues, and we also thought it would lead to savings in electricity when we first started looking into it.”

The equipment upgrade came with a corresponding new technology price tag. Petzoldt knew that Citizens Electric Corp., the company’s local electric cooperative, offered Power Moves® rebates for businesses that installed energy efficiency upgrades to existing equipment. So the company contacted the co-op to see what would be possible.

“It was a pretty expensive project for us, and we were on the fence as to whether or not we wanted to invest that much in a capital expenditure,” Petzoldt said of replacing the system that cuts each piece of timber that comes into the business. “We found out we were eligible for a rebate, and after that, it put us off the fence and we decided to go ahead.” 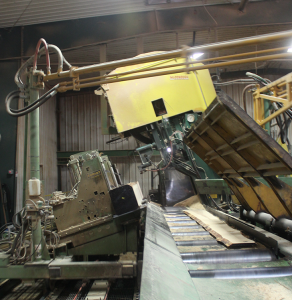 The new electric carriage system replaced a hydraulic system, which could pose a risk to employees if hydraulic fluid overheated and there was an accident, Petzoldt said. The technology is a regenerative system the uses energy during the carriage acceleration phase and returns energy during the carriage deceleration phase. The company saves 306,600 kilowatt-hours per year, or 8.5 percent less energy consumption than with the previous system.

“We are invested in the families and businesses that we serve, and our Power Moves collaboration with a local, family-owned business like East Perry Lumber is a terrific illustration of that,” said Van Robinson, president and CEO of Citizens Electric Corp. “As a major employer, East Perry Lumber’s impact extends into the community and beyond. We are happy to have worked with them on a project that helps to impact their success.”

The new equipment has helped reduce one of East Perry Lumber’s significant variable costs, which isn’t bad for machinery that is critical for the company’s operations.

“We have more of a reliable operation,” Petzoldt said of the new machinery, “and safety has been improved also.”