Parke County, Ind., native Cyndi Todd fondly remembers playing in her great-aunt and uncle’s home on the grounds of the former Indiana State Sanatorium. The hospital complex that first opened in 1907 to treat tuberculosis patients was built as a self-contained campus, with houses and apartments for the doctors, nurses and employees – including Todd’s great-uncle, who was a groundskeeper. 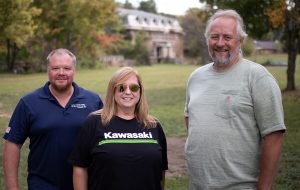 Todd did a double take in 2015 when she noticed the hospital property on a list of locations owing back taxes. The amount owed to the rural west-central Indiana county was growing larger than the weeds overrunning the site that last operated as a nursing home before shutting its doors in 2012.

“Property taxes need to be paid in order for us to be able to fund other types of projects,” Todd said. “That’s why it caught my eye.”

The then-newly-minted economic developer committed to resuscitating the complex. Her trek would take longer than a half-decade and receive aid from unlikely places – including the local electric cooperative and its wholesale power provider. 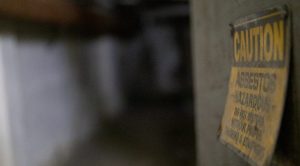 A dust-covered sign warning of the asbestos found in the tunnels carrying steam and other pipes through the buildings around the former Indiana State Sanatorium campus.

Todd and Anderson discussed the challenges posed by the former Indiana State Sanatorium. WVPA paid for a Phase I Environmental Site Assessment, which provides an initial site analysis to determine potential risks to people or the environment.

Some assessment findings were expected: asbestos in pipe insulation required remediation, and old coal ash near the power plant also required clean-up. Yet the situation was worsened by vandals who broke into the vacant buildings and stripped out metals. They tore apart the insulation containing asbestos that covered copper pipes, scattering asbestos particles into the air. 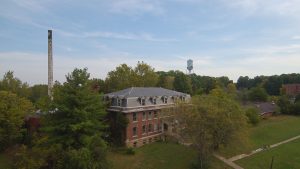 The former Indiana State Sanatorium administration building, which featured lodging for nurses and doctors who worked at the hospital.

The project lingered for a few years as Todd worked on less arduous projects. Anderson, who worked on numerous historical restoration projects as an economic developer in Lansing, Mich., suggested the Indiana Brownfields Program might help. The program is part of the Indiana Finance Authority and works with the U.S. Environmental Protection Agency and additional state agencies to rehab brownfields, which are former industrial or commercial sites that are at risk of having environmental contamination.

“You don’t always know where these projects are going to end up,” Anderson said. “Part of the story with this is just how long it takes for projects like this to come together, because it was definitely a slow boat.” 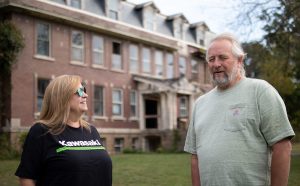 Cyndi Todd and Gregg Larson in front of the administration building for the former Indiana State Sanatorium.

In 2019, Todd contacted the Indiana Brownfields Program, and received support. The initial Environmental Phase 1 Assessment had expired, so the Indiana Brownfields Program funded a new one as a well as a Phase 2 Environmental Site Assessment, a more in-depth review that includes geologists taking soil and groundwater samples to test for contaminants.

Todd also worked with the Parke County government to get a tax deed on the campus buildings, and the Indiana Brownfields Program paid for remediation work to start. 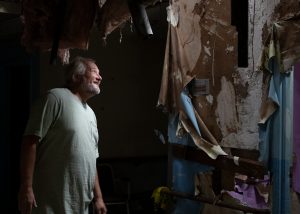 Gregg Larson, a civil engineer who bought the former Indiana State Sanatorium site in Parke County, Ind., looks toward the roof of the former nursing home building that fell into disrepair and vandalized after its closure in 2012.

Nearly a decade after it closed, the former Indiana State Sanatorium was getting a new lease on life.

The property’s history was well-known, and the clean-up gained attention. Gregg Larson, a civil engineer who owns an Illinois farm about an hour west of Parke County, was searching for a historical building to rehab when he learned about the site.

“Since banks wouldn’t give a mortgage on it, it really depressed the price,” said Larson, who was seeking an old historic property to refurbish. “We probably paid less for the site with everything you see on it than we would have if it would have been empty land.” 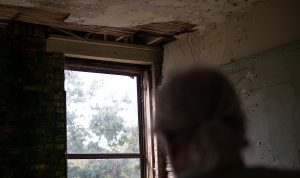 Gregg Larson peeks into a room in the former administration building of the Indiana State Sanatorium.

Shortly after Larson bought the property, people started contacting him about visiting. The site was a magnet attracting ghost hunters. The site’s century-old history as a tuberculosis hospital, nursing home and mental hospital created intrigue. Previous patients and residents left personal items in several of the buildings, which significantly ups the ghoul factor for some enthusiasts, Larson said.

“I get to talk to ghost hunters every night,” said Larson, who’s had several months with more than 20 overnight stays booked by paranormal investigators. “I don’t believe in ghosts, and that makes me more fascinating to them. They can’t believe it, because basically everybody who owns a haunted place like crazy believes it.” 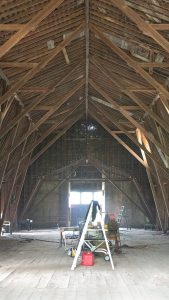 Gregg Larson has already started renovations on the historic dairy barn along U.S. 36.

He’s also welcomed others to the property: several county SWAT teams, and even the military have conducted training out on the site. A group of reenactors as medieval Vikings spent the weekend on the site, and over the summer several thousand people visited for an ATV race.

Larson has started working with Parke County REMC on electricity needs to prepare for the buildings to host large-scale events, including weddings, receptions and other gatherings. The complex’s entire electrical layout needs to be redone to account for the site’s new plans.

“It is a great accomplishment,” said Jeremy Montgomery, an energy advisor at Parke County REMC and county native who has worked with Larson on energy planning. “I love seeing things old made new again, and buildings that are underutilized back to serving a purpose.”

One of Larson’s first major site renovations is possibly the most visible: a 12,000-square-foot dairy barn designed by Purdue University in 1914 that sits along U.S. 36. Larson is renovating it to be an event space; he even hopes for vendors to be able to sell items there during the annual Parke County Covered Bridge Festival. 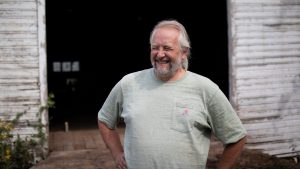 Gregg Larson in front of the dairy barn along U.S. 36 in Parke County, Ind.

“I love it,” Larson said of rehabbing the historical buildings. “It’s like the world’s biggest Lego set.”

The sanatorium rehabilitation highlights the beneficial role that government can have in economic development, Todd said. Parke County was a conduit for the site transformation without spending any money.

In September, Parke County signed over the tax deed to Larson. The environmental clean-up of the coal ash behind the power plant is expected to finish in 2022, Larson said. In October, the Parke County Council re-zoned the historical dairy barn location so that it can host public events.

“I had seen when it was a gorgeous campus, and I always held that in the back of my mind, that the beauty could come back if someone cared for it,” Todd said. “And that’s what’s happening now with Gregg’s commitment.”